My father was a smoker (Lucky Strikes) for some seventy five years of his life and although cancer isn’t common in our genetics, he couldn’t escape the ravaging effects of emphysema (COPD).

He lived until his 88th year and passed at our home on Christmas Eve 2012.

This is a poetic summation of conversations, that I had with him and the brilliant wisdom that he could put into the simplest form…”Who was Lucky?” 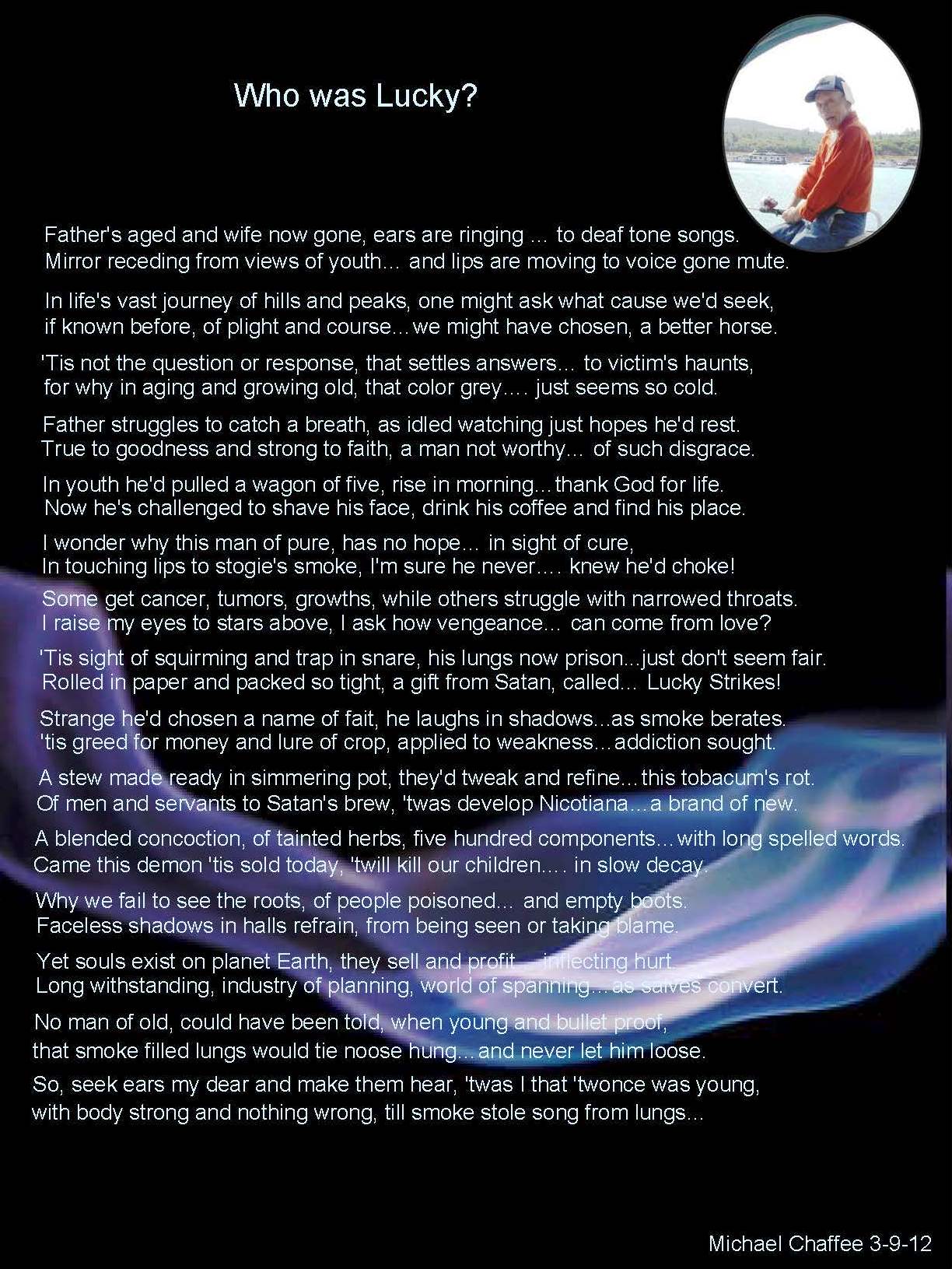 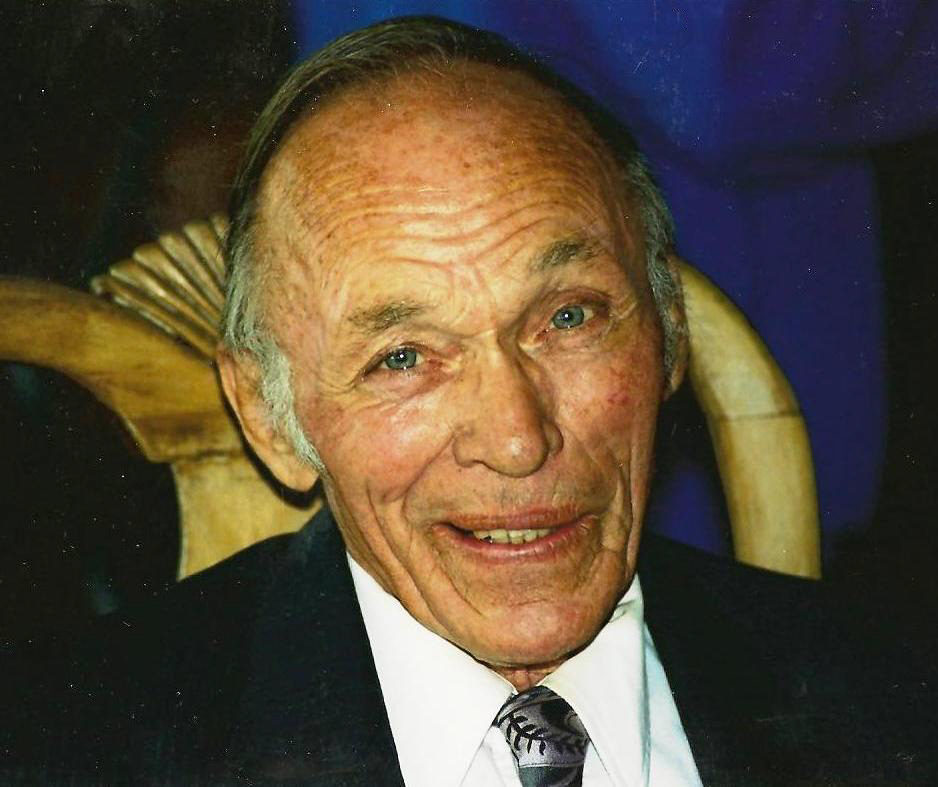 In honor of the greatest man I’ve ever known…

Today is a day to pay homage and celebrate the life of Gerald H. Chaffee. Many of you knew Gerald as “Gerry”, a happy and fun spirited man who experienced the full flavor of a complete life. As one of his three sons, what I wish to have Father Roman express on my behalf, is a remembrance today about Gerry is the message he provided in his living example.

You see each of us plays a part in one another’s life, as friends or family or even perfect strangers. Sometimes we lose sight of others in our daily rituals, challenges and behavioral idiosyncrasies. These can eclipse the truth of our characters and leave the world unaware of who we claim to be.

No one who knew Gerry could say that they didn’t feel his infectious love and positive attitude. He devoted his concentration to exposing us to an earnest sincerity for his deep connection to our Lord. He lived the message of selflessness, generosity and had an empathic passion about how others were feeling. As a kid, I would often wonder how he came to arrive at this peaceful place, considering his upbringing.

His life as a child was filled with hardship and absent the love of a father and mother, for they abstained from their responsibilities as parents and gave him and his two siblings up to foster care. In those Depression era years, foster care through the Children’s Aid Society basically placed him on a farm as an unpaid laborer.

From the early age of seven, he began working the fields with horse drawn plows…hum, unimaginable today! He would often suffer great cruelty in some of his foster home environments, including “Cat of Nine Tails” whippings, yet what came from these experiences wasn’t anger or hatred.

As a matter of fact, one of his most famous saying provides us a window into his soul…”They are to be pitied, more than scorned”.

Although I’d heard this at times as a kid growing up, it took me a lifetime in order to mature enough to and connect the lessons my father was teaching me. You see this was one of Christ’s parables…

Matthew 5:39: “But I say unto you, That you resist not evil: but whosoever shall smite you on your right cheek, turn to him the other also.”

The interesting thing about this is that, Gerry never read the bible, nor did he have any formal religious teachings as he grew up. But yet somewhere along the way, somewhere in his seeking of answers for life’s injustices, Gerry in the depths of childhood abandonment, sought out God’s enlightenment.

Our Lord (as he referred to Jesus Christ) extended his hand to Gerry, providing him the strength to rise above it! My father’s message here was clear to me even at a young age.

I know as much as any man can be certain that Gerry is enjoying God’s Heavenly Kingdom today. I know this not because he was my father, I know this because of the many examples of men that I’ve met throughout my lifetime and I have yet to meet one who surpasses Gerry’s level of conviction to God’s goodness.

As a young man, Gerry’s journey took him from a rural farming community outside Detroit, Michigan into the U.S. Navy during WW II, as a Seaman First Class 20mm Anti-Aircraft Gunner.
Gerry traveled the seven seas, sailing out of the San Francisco harbor across the equator to the South Pacific, participating in the US Navy Equator Initiation Ritual. He was reprimanded by King Neptune for making coffee with saltwater.

He also sailed out of New York into the Atlantic, Mediterranean and Indian Oceans. From Bombay to Sidney Australia, he flavored the world. In his five years in the U.S. Navy these experiences exposed him to the full breath of mankind on planet earth and allowed him to come to appreciate that as bad as things might have been growing up for him, to be thankful because someone else can always have it much worse.

This humility was very much a part of Gerry’s persona. He knew what it was like going hungry and being bitter cold, in those fidget Michigan winters while sleeping in the lofty barns.

He knew what it was like to have nothing and no one. He never allowed the bitter cold and absence of a loving family to consume him and succumb to becoming bitter or evil. He never used his plight as an excuse to justify bad behavior; he used it as a silent example to set the yardstick for having any rights in issuing a complaint. I knew as kid growing up, that I could never take ownership to a claim that my life was somehow unfair!

From his callused hands that engaged a very physical six day work week, he raised five children on what was earned from a small business. Absent an example of business management or good parenting he and my mother gave us a sense of family, religion and entrepreneurial spirit. In respect for my mother’s wishes he converted to Catholicism in order to raise his children in the common unity of faith.

Although God chose to take two of his children early (Debbie and Earl), it never gave him reason to distance himself from the Lord. I can’t image the loss of a child, and not question God but, Gerry having lost two, here again…provided a longer yardstick.

As many of you know my father has lived in our home during the past seven years while struggling with emphysema. This bronchial condition was brought on by smoking Lucky Strikes for sixty five years.

He carried his load and became the beast of burden in offering a yardstick from which to measure, without complaint, without question, often in pain and without excuse.

People would often say, hey Mike, you and Janine have done a wonderful thing looking after your father…hum?

Well…actually here again was my father unconditionally extending his love at great sacrifice. You see it wasn’t us doing for him; it was him doing for us!

In his partnership with our Lord they both agreed that Janine and I needed something in our Book of Life from which we could read from someday, when summoned in our future to God’s Kingdom. Absent this opportunity to care for my father, from what page would we be able to read?

You see at great sacrifice and endearing love he stayed with us offering opportunity, not obligation from which deeds not words could provide some small measurement to the weight of a soul. Only God knows the weight in worth for a man’s soul and only he can judge such value but, I’m sure that my earthly father Gerry, was again continuing to father Janine and I.

He provided me a view of my wife’s loving care and giving, understanding, tolerance and perseverance to accept inconveniences and not question God’s intentions for my father’s suffering. Her unwavering commitment exemplified once again, the influences of Gerry’s faith in God and recognition of the benevolence of God’s claims on prerogative. Although never having read Job, he knew instinctively in his very personal relationship with God, that God’s plans go unquestioned!

Why does God allow some to live longer and suffer? I believe he does so in order to afford others the opportunity to scribe the words, sentences, paragraphs and pages that will be the story that’s told in the chapters of our lives. Those will be the testimonies of our characters, those will be the evidence of our worthiness…For what would be the worth of any gain, if not able to be measured in the uncertainty during our struggles.

I believe Gerry offered us a map in living his example, a map in kind for how to view what’s just over the horizon for us all. This happy go lucky guy would give you the shirt off his back, if you needed it and he would give you the last dime in his pocket, where his exposure to life provided him every excuse to do otherwise.

Don’t let that feeling go wasted, don’t let his memory end today and his story go silent. Remember Gerry today and in your tomorrows, in administering the honor of his spirit to others. Be the kind of man or woman that invests a lifetime in others, friends and family alike with kindness of words and deeds. Look into the eyes (as Gerry did) of everyone you meet and seek the love of God in that reflection. As Gerry would say…it’s right there staring at you!

During the past few weeks Gerry was beginning to see visitors, however imaginary. At times he was concerned for the capacity of our home to hold what he thought to be possible hundreds of celestial visitors. I explained to him, not to be concerned, after all maybe he was beginning to be able to see through the thin veil. I explained that although I couldn’t see what he was seeing, that he was probably quite the celebrity on the other side, so they were just a few early attendees to his welcome home party!


On behalf of Gerry’s family thank you for coming here today and remembering him and honoring his life. Please don’t harbor any sadness for his eighty eight years of life, be happy that through all his struggles and uncertainty in this world, that he wrote one heavenly story. He isn’t gone…he is here in spirit, just on the other side of this thin air…Please take a moment, close your eyes and just imagine his smiling face. Rejoice…his suffering is over and he is now in God’s kingdom for eternity…